The European Bedding Industries’ Association was created in January 2000. Its founding members are the national bedding associations of Austria, Belgium, France, Germany, Italy, Spain and The Netherlands, and 3 multinational groups, i.e. Oniris, Recticel and Slumberland. 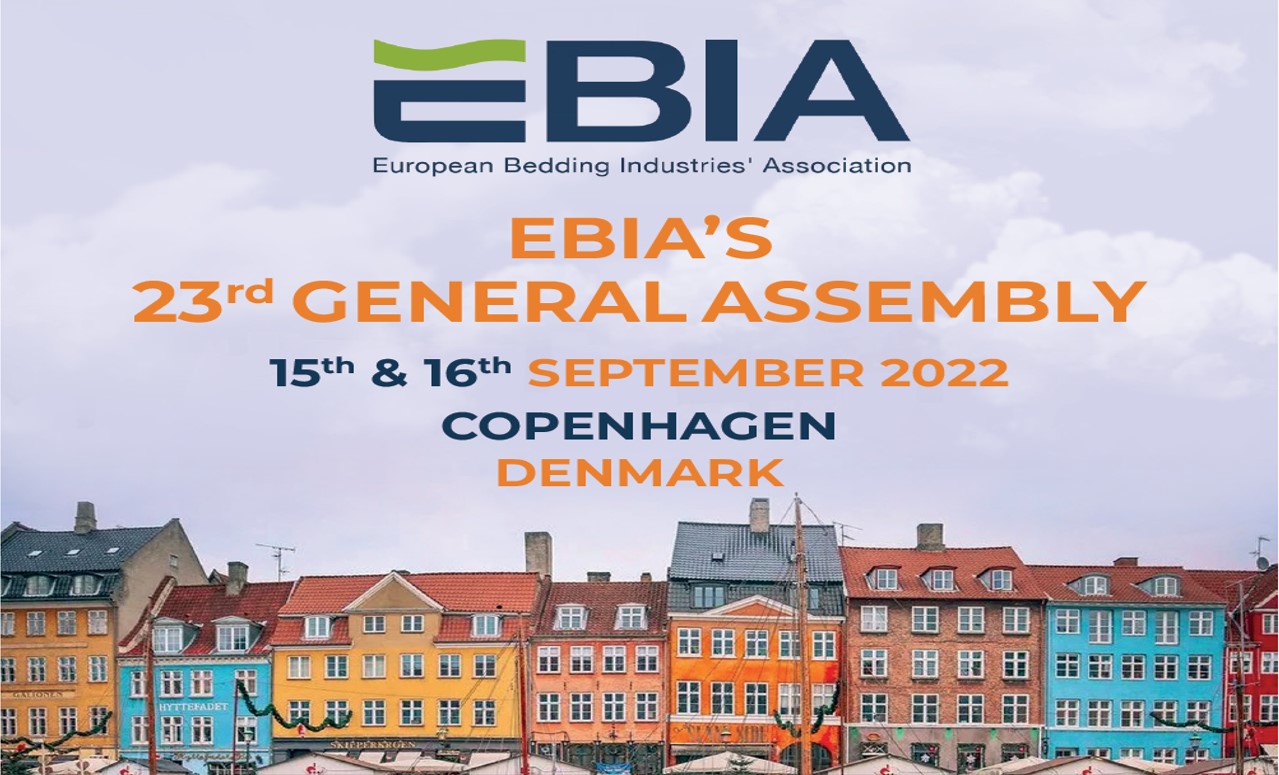 On 15 and 16 September, representatives of EBIA members gathered in Copenhagen for the 23rd General Assembly. 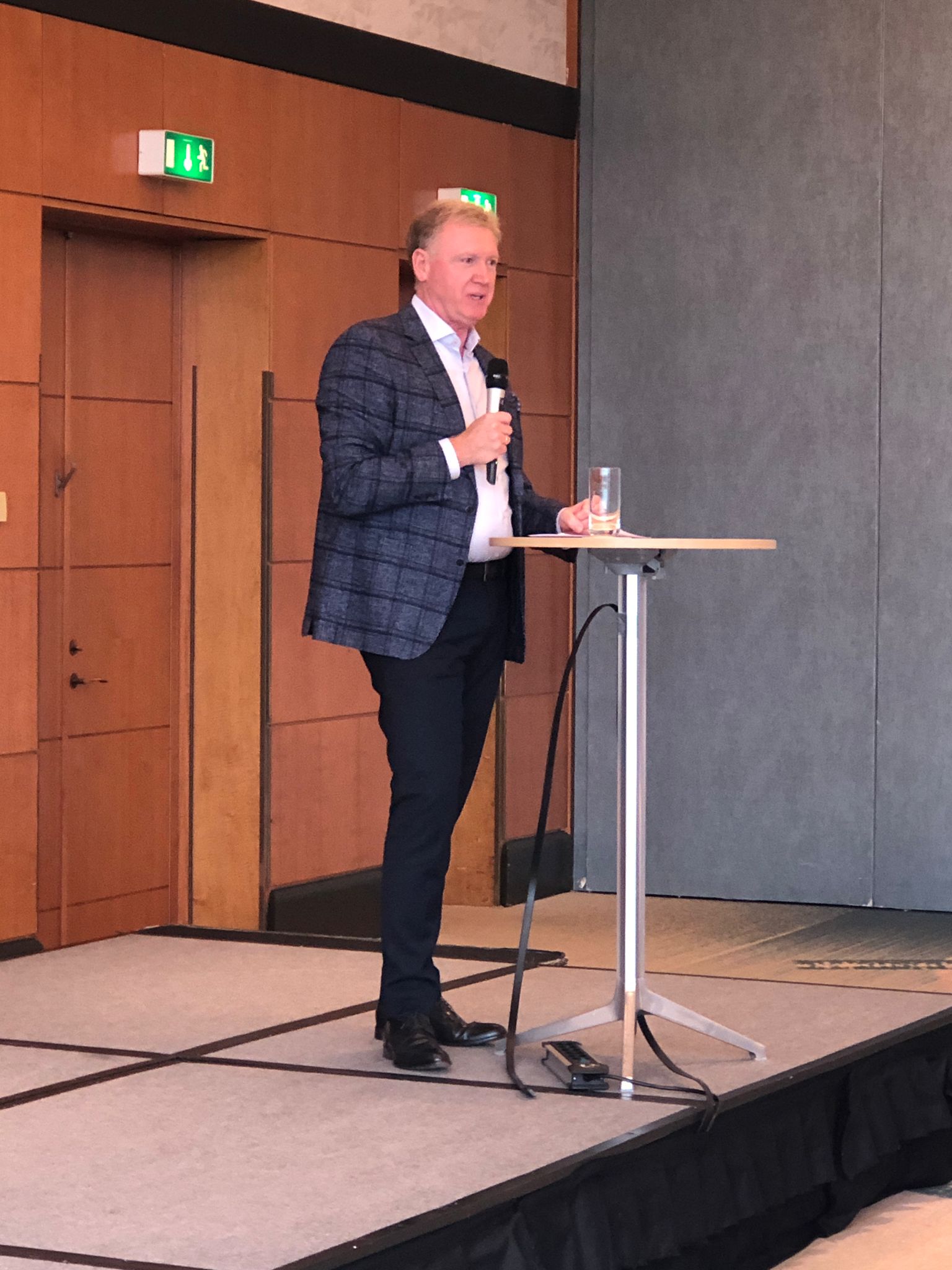 After 2 consecutive years of Covid restrictions, EBIA president Geert Geerkens, was delighted to welcome representatives from both manufacturers and suppliers to the first physical event since 2019. All participants clearly enjoyed this renewed personal contact, in an atmosphere of optimism, revival and experience sharing.

The conference was opened by a very inspiring and dynamic presentation by the international keynote speaker Mr Steven Van Belleghem. He addressed the audience with a thriving speech on consumer-centric thinking, the latest technologies and the human touch in consumer relations, based on his recent book ‘The offer you can’t refuse’.

He introduced the concept of friction hunting and invited all companies to be the oxpeckers to their customers (metaphor to the role these birds have for African rhinos): being there and offering support where and when their customers need it – without their presence being experienced as inconvenient or intrusive).

Many of the speakers touched on the issue of sustainability. Mr Chris De Roock, general manager of the Belgian research center WOOD.BE, talked about “Design for Circularity”.

He elaborated on issues like Extended Producer Responsibility, design for circularity (D4C), the working groups that started this year and that tackle questions like material passports, eco-modulation, circular business models and European standardisation.

Managing Director Frederik Lauwaert presented the activities of EBIA and focused especially on all initiatives related to Extended Producer Responsibility. He also presented the EBIA Blueprint for a European EPR scheme for mattresses. This is a blueprint to assist companies and authorities when developing a national EPR scheme based on the ‘lessons learned’ in countries where such a scheme already exists.

He furthermore dived into the proposed Ecodesign for Sustainable Products Regulation and presented its potential impact on the bedding sector.

To close that first day of Assembly, Mr Chris Belterman, Product Marketing manager at SABA Adhesives & Sealants, talked about the role of adhesives in a circular mattress.

The second day started with an introduction to the Nordic bedding market by Peter Sturm, CPO at Hilding Anders. He shared with the participants his views on trends related to sustainability, interior design and health&wellness.

Mrs Giulia Taveggia, researcher and analyst at CSIL, opened her presentation with an overview of the sector in terms of production, consumption in the bedding markets across the world. She also focused on the European market, giving the audience a good understanding on the volumes of imports, exports, production and consumption.

She concluded her intervention with details on the E-commerce market both on a European and worldwide level.

Mr John Kruijssen, CEO at BeterBed Holding, closed the annual meeting with a dynamic and interactive presentation entitled “Sleep! Who’s responsible?”. There is no getting away: the quality of sleep is under pressure and the sleep domain is more relevant than ever. He identified seven trends that shape the future of the bedding market – from health awareness, vertical integration to rising online trends and geographic expansion (fragmented retails landscape with brands moving easily across borders). He shared his experiences in changing the way retail interacts with customers and the efforts in moving away from selling beds to providing better sleep for customers. He called all stakeholders to take responsibility in proving a good sleep to the consumer and to endorse their recently launched “Sleep Manifesto”.

The EBIA president concluded the annual conference with an indisputable, positive perception of this General Assembly in Copenhagen. Undoubtedly, the place to be when it comes to sustainable, future proof living.

Finally, all participants and members were invited to next years’ EBIA Annual meeting, that will take place in Prague on 21 and 22 September 2023.

Mr Verschuere, who was nominated EBIA president in 2005 during the EBIA GA in Amsterdam, held the position for a total of 13 years (from 2005 to 2015 and from 2018 to 2021). “Being there at the creation of EBIA and having served as president for 13 years has been a privilege and I am proud of the achievements accomplished during all these years.”

On the proposal of the EBIA Board, the General Assembly of EBIA took the unanimous decision to nominate Mr Geert Geerkens as the new EBIA President.

Mr Geert Geerkens, director Sales and Marketing at the Belgian company Veldeman Group, states “I look forward to working with EBIA Board and all our members to ensure EBIA continues to support the bedding industry in all its activities.

I fully believe in the European co-operation and am convinced that working closer together will lead to stronger results. EBIA must continue representing the bedding industries in Europe with one voice and we will work together to prepare the industry to thrive in the green and digital transition.”

“I would also like to warmly thank Frank for his invaluable contribution to EBIA in the past years. He has been a real driving force in the organisation, relentlessly promoting the interest of the bedding manufacturers and helping the sector to achieve significant successes.

Launch of EPR for mattresses in Belgium

As of 1 January 2021, the extended producer responsibility (EPR) for mattresses will come into force in Belgium. This EPR means that each producer and importer of mattresses will be responsible for the waste flows arising from the sale of mattresses in Belgium. They must therefore intervene in the costs of collection and processing and, in addition, achieve the legally established collection and recycling objectives. The management body Valumat vzw, an initiative of a number of mattress manufacturers and the sector federations Fedustria (producers), Comeos (wholesale distribution) and Navem (furniture trade), was set up to help manage this system. More information can be found on the website www.valumat.be/en.

The European Bedding Industries’ Association (EBIA), the umbrella organization of the bedding industry in Europe, announced Kathleen McGrath as the winner of the 2013 EBIA Award. Being a prominent and widely respected nurse in the sleep research eld, Kathleen McGrath founded in 1986 the Medical Advisory Service (MAS), a nurse-run telephone information charity specialising in providing information and advice on the retraining and working with nurses invalided out of the National Health Service (NHS). MAS has provided an insomnia helpline, Sleep Matters, for well over 20 years now, providing an essential lifeline to insomniacs throughout the UK. As a media & communications advisor she also uses her broad clinical and medical communications experience to write and broadcast on medical and sleep matters for several media (TV, Radio, consumer print media,…).

For the Sleep Council, Kathleen wrote the information leaet, The Good-Night Guide for Children, published in 2009 and in 2012 helped to develop the interactive website, www.perfectsleepenvironment.org.uk. With this award,EBIA recognizes Kathleen McGrath’s tireless dedication to sleep quality and her bridge-building efforts with the bedding industry. EBIA will therefore further strengthen its ties with Mrs McGrath, to pave the way for the improvement of the sleeping experience of consumers all over Europe.

The European Bedding Industries’ Association (EBIA), the umbrella organisation of the bedding industry in Europe, announced Dr. François Duforez as the winner of the 2012 EBIA Award. Being a prominent and widely respected researcher in the sleep research field, Doctor Duforez currently works as a consultant at the physiology and sleep research department of the Hôtel Dieu Hospital in Paris, France. In 2007 he founded the European Sleep Center (ESC), an institute that conducts research for individuals as well as collectivities in order to diagnose the relationship between sleeping difficulties and concentration levels. With this award, EBIA recognizes Doctor Duforez’ tireless dedication to sleep research and his bridge-building efforts with the bedding industry. EBIA will therefore further strengthen its ties with Doctor Duforez, to pave the way for future research to improve the sleeping experience of consumers all over Europe.

The European Bedding Industries’ Association (EBIA), the umbrella organisation of the bedding industry in Europe with headquarters in Brussels, announced Belgian Prof Dr Raymond Cluydts of the University of Brussels, as the winner of the 2011 EBIA Award. As a prominent and widely respected researcher in the sleep research field, Professor Cluydts has focused on the effects of sleep deprivation in healthy individuals. As one of the founding fathers of the Belgian Association of Study of Sleep (BASS) Professor Cluydts is convinced that good and state-of-the-art bedding benefits the consumer. With this award, EBIA strives to provide further momentum for Prof Cluydts’ sleep research, which assists the bedding industry in permanently improving its products and the quality of sleep, undoubtedly in the interest of the European bedding consumer.

At their annual General Assembly on 8th October, the European Bedding Industries’ Association (EBIA) announced the winner of the 2009 EBIA Award, which this year goes to Dr. Damien Léger from France. Dr Léger’s main concern is that people are sleeping less and less. It has become increasingly hard for twenty-first century men and women to fit a day’s activities into 24 hours, while allowing for the fact that we sleep at least a third of that time. A recent survey by Dr. Léger’s centre revealed that the French, on average, are sleeping up to 1.5 hr less every night than they did 50 years ago. With this award, EBIA hopes to recognize his exceptional contribution to the domain of sleep pathology.

BRUSSELS, 21st March 2007- For the first time, an independent and scientific research study performed by Dr. Bert Jacobson of the Oklahoma State University and supported by EBIA, confirmed the link between a good mattress and a good night’s sleep. The choice of a new mattress can improve up to 63 percent of high back pain complaints.

Millions of people are affected by lack of sleep, making it one of the most frequent health problems of today’s society. The International Day of Sleep – held each year on 21st March – focuses on this too often neglected problem. A deficiency of sleep interferes with daytime activity, social interactions and mood, which can also be associated with loss of work productivity and accidents.

At its annual reunion held in Amsterdam on 15th and 16th September 2005, the General Assembly of the Brussels based European Bedding Industries’ Association (EBIA) elected Mr. Frank Verschuere, a Belgian national and member of EBIA’s Board of Directors, to the Presidency of the association.
Mr. Verschuere was nominated for an initial 3-year term in office. He will replace EBIA’s co-founder and late President Mr. Teddy Ancion, who unexpectedly passed away last June after a short illness.

In line with the conclusions of the marketing working group and the General Assembly held in Berlin, EBIA’s Board has appointed Zeylmaker&Partners, a Dutch advertising agency experienced in the bedding world, to prepare a European promotion campaign. Their mission is to develop a TV-commercial, a radio spot, artwork for press, and POS material, all in English. Translation, choice of media and media buying will be organised by the national federations. The relevant consumers’ pre-test has meanwhile been successfully finalised and the elaboration of the campaign has now entered the production phase. Some countries, having just started their own campaigns, will later decide how to use the European campaign. All ready materials will be presented during EBIA’s forthcoming General Assembly in September in Lisbon.

Dear Member,
We grasp this opportunity to draw your attention to an interesting scientific study directly involving mattresses, carried out by the Kovacs Foundation in Spain (*). It is entitled

and has meanwhile also been published in the renowned medial journal The Lancet. Though conclusive scientific evidence is still lacking, the study of clearly established a positive link between patients suffering from chronic low-back pain and the beneficial effects of new medium firm and firm new mattresses on their conditions.

On 20th & 21st September 2001 the charming thermal city of Montecatini became the European capital of the bedding industry. Invited by EBIA (European Bedding Industries’ Association), About 140 people came to Italy for two days of hard work, informal meetings and relaxation.